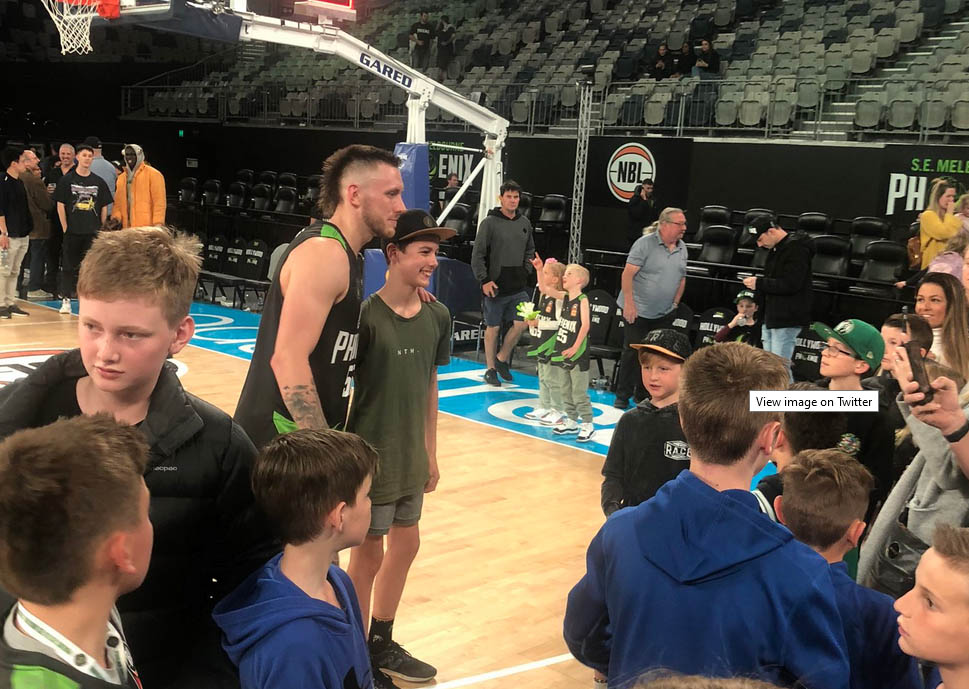 The best player on the NBL’s new franchise, for nearly a decade, Creek has been one of the NBL’s most recognisable faces and represented Australia, amid NBA stints with Brooklyn and Minnesota.

But all the fanfare is just that for the kid from Horsham.

The throng of Phoenix fans is 10 deep and they’re all starry-eyed, hoping to get a chance to spend just a moment with their hero.

Every one of them would.

A father took a photo of Creek with his son. As he walked away, Creek said “Hang on, do you want one, too?” Of course dad did.

One youngster, not more than 10 years old, asked if Creek used to play for his local club. Mitch didn’t, but words of encouragement flowed.

After the players and officials left the court and the TV cameras switched off, Creek spent more than 45 minutes mingling with fans, smiling the whole time.

“Ever since I started playing I always made sure I had time for the fans,” Creek told the Herald Sun — after every Phoenix supporter had finally made their way out of the arena.

“At the end of the day, they pay your cheque, they’re the diehard fans who come in and spend their hard-earned money on jerseys, nice seating food, beverages, they do all that just to come and be a part of an atmosphere, so we have to show them as much respect as they show us.

“I came from a really small beginning and I understand what it’s like not to have some of the finer things in life so when you give back to them, that can change someone’s week or month or day or night. You just never know what someone’s going through so sometimes that little bit of extra care goes a long way.”

Creek sports a flamboyant ‘fadehawk’ haircut, is covered in tattoos and likes to give people an insight into his action-packed life on Instagram.

“When they (fans) come up and have a chat and joke around and talk about my haircut or my pet magpie that I’ve got living at the house or my skydiving or some of the cool things I get to do, it’s really cool when they can relate to you a little bit,” he said.

Creek will be at the forefront again when Phoenix face off against Melbourne United in Throwdown III on Saturday, with the record between the two teams locked at 1-1.

“I knew they were going to come out firing they made better plays than us, we turned it over in bunches, we just didn’t play good basketball.

“Shawn Long kicked our arse, old school, gave us an arse-kicking. I’d love to say it’s not going to happen again but our lack of size does hurt us. Dane’s (Pineau) got his work cut out for him, but we’ve all got to help.

“You have to take what we’re doing during the week seriously and apply it during the game.

“We did it against New Zealand and the results speak for themselves.”